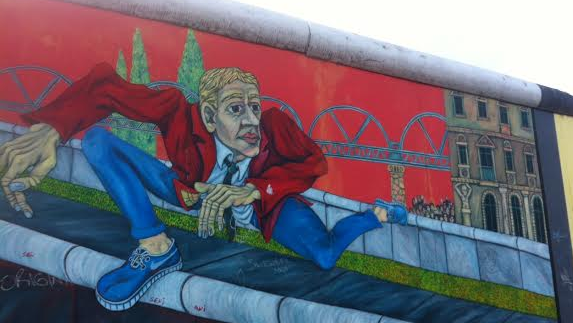 Berlin isn’t the only city with a wall.

I didn’t understand it any better than the Sex Pistols did. I mean, yeah, it’s obvious. Put up a big concrete wall—or rather, two big concrete walls with a “death strip” of no man’s land between them—and you can keep people separated. But when I stood beside it, the bluntness of the Berlin Wall seemed like such an undignified form of social control. It’s so unsubtle. In the capitalist west, we’re not used to this naked approach to power. Sure, the United States can be pretty ungraceful with its muscle flexing. In its suppression of political movements, policing of minorities, and dealing with “threats” from abroad, the government isn’t exactly understated. But a wall? C’mon.

I was in Berlin last week presenting at a workshop on protest culture, or “protestkultur.” (Isn’t German fun?) I spent an afternoon walking up and down Mühlenstraße, where the longest remaining stretch of Wall snakes along the river Spree. This is the East Side Gallery. During the anxious street party of reunification, this mile of east-facing concrete was divvied up and painted over by more than 100 artists. There are psychedelic swirls, hopeful slogans, and elegies to a city bifurcated.

At present, the west side of the Wall is devoted to “Wall on Wall,” an exhibition of photographs by Kai Wiendenhöfer. (“Wall on Wall” was scheduled to close on November 10th, but remained up as of my visit on the 13th.) Wiendenhöefer has made a subject of border barriers, blowing up his panoramic pictures of militarized concrete to 3m x 9m and mounting them on the Berlin Wall with wallpaper glue. He’s shot the fences along the most trafficked portions of the US-Mexico border, the policing of which forces migrant workers to take dangerous rural routes into the States. Every year, several hundred Mexicans die trying to get around the walls we’ve built to keep them from picking our produce for less than minimum wage. By way of comparison, only 138 people died trying to cross the Berlin Wall during its 30-year existence. 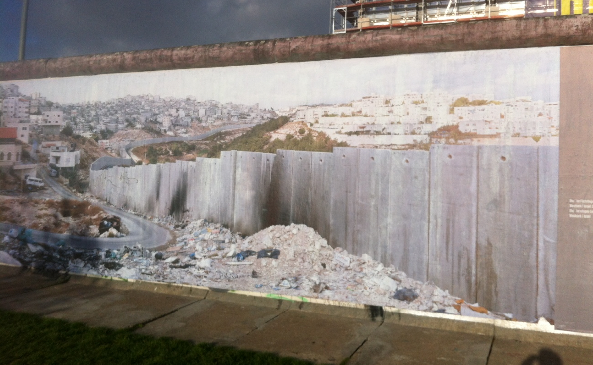 Wiedenhöfer also shot the Israelis’ wall—but seeing as how the United States gives Israel $3.1 billion in military aid each year, it’s kind of our wall, too. This wall doesn’t just keep Palestinians out of Israel. It keeps them from moving freely through the land that’s ostensibly “theirs,” separating farmers from their land, students from their schools, and people from their families. Experts estimate that 130,000 children go unimmunized because the wall complicates efforts to provide basic health care. As many as 100,000 pregnant women are going without the prenatal attention they need. In some Palestinian towns, the average wait time for ambulances has jumped from 10 minutes to 110 minutes. Yet Israel insists that its wall—our wall—is for security, even as it endangers an entire population.

“Wall on Wall” reminds us that we’ve shed neither the impulse nor the will to lock up our borders with the modern equivalent of a moat & drawbridge. So the weirdness of the Berlin Wall isn’t in the frankness with which it kept people caged. The shock comes from who it caged. Twenty-four years ago, a big damn wall separated one group of white people from another group of white people. And these weren’t just any two groups of white people: they spoke the same language and shared the same city.

Back in the pan-European present, I crossed from Germany into Poland without needing to show anyone my passport or, in fact, say anything to anyone. I can go between the US and Canada without doing much more than slowing my car down and waving at a dude in a uniform. Of course, the sailing might be less smooth if you’re tanner than I am. Today Western governments build walls not to inhibit the free movement of their own (mostly white) citizenry, but to keep out the (usually non-white) Other. White guys like me experience such walls mostly as a minor inconvenience on the way to Tijuana. That’s why running up against a 12-foot-tall slab of concrete cutting through a European capital felt so unsettling. This isn’t where barrier walls are supposed to be. I reacted like Johnny Rotten: “I don’t understand this bit at all.”

Moving around the US, we rarely see this kind of wall outside of prisons and gated communities. Walls are embarrassingly frank about the artificiality of their power. While Eastern Bloc communism was pretty candid about its authoritarianism, capitalist countries like trying to pass off their internal separations as natural. We say that it is “market forces”—as clear and immutable as the force of gravity—that fling us into different neighborhoods. Yeah, it sucks that some people live in areas with high crime, shitty schools, and no jobs, but it’s not like anyone built a wall to keep them there, right? The country has just mired them in poverty, provided only the merest sprinkling of affordable housing, and used that very rhetoric of the market’s natural meritocracy to try to convince them (and everyone else) that they’re to blame for their suffering. It’s a lot harder to tear down a wall you can’t see.

Let’s get optimistic for a second. Prisons have walls, yes, but so do laboratories. West Berlin was cut off from the rest of West Germany by a broad swath of red. Respectable sorts didn’t want to live on an island, so the city was left to the punks, gays, artists, and radicals attracted by cheap living and an exemption from compulsory military service. People experimented with life. They squatted, made art, and worked as little as possible. The countercultural character of Berlin solidified to the point where, up until just a few years ago, you could live comfortably working a couple days a week in a café. Nice one-bedrooms in exciting neighborhoods can still be found for €600 per month, a price that makes New Yorkers shit their shorts in envy.

Beautiful as they are, cities like Paris and Rome feel like museums locked in time, as if they acknowledge that their best days are behind them. Berlin still feels alive, malleable, creative. In this publication, Nick Mirzoeff has written about the revolution of everyday life happening in Detroit. If there is a Detroit Wall, it’s of the invisible capitalist variety. The wealthy leave because they can, the poor stay because they have to, and a handful of cultural & political radicals are drawn to the real-world laboratory. Maybe, when capital retreats, a new kind of city can be built. It won’t be easy, but Berlin managed to create a stronghold of leftist bohemia in the former seat of fascism. Maybe Detroit can build a culture of communalism in the graveyard of American industry.