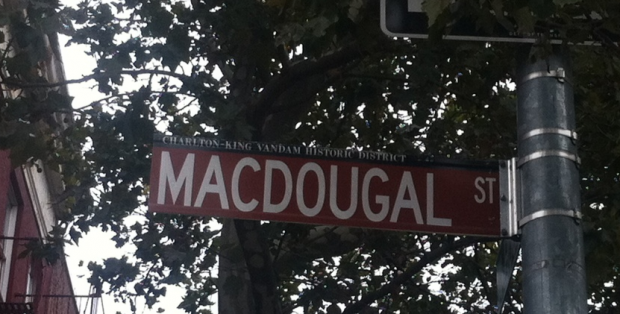 It’s Thursday on MacDougal Street. The sky over Greenwich Village is that stupid dull silver that threatens rain without actually delivering, so the city is going about its business tentatively, staying close to homes or workplaces or, at the very least, awnings in case of a cold, pissing October rain. It’s not a day for big commitments, so I’ve kept mine to just nine blocks. Nine blocks, and then the rest of Manhattan.

Other folks have scratched the itch to walk Manhattan until there is no more Manhattan to walk. Dede Emerson’s “personal Mt. Everest challenge” led to a photo book. When Columbia librarian Caleb Smith finished the feat in 2004, he scheduled its completion to coincide with the 50th anniversary of eccentric Navy officer Thomas J. Keane’s long trudge through the island’s 3,000 blocks and 500 miles. And as I type this, a man named Matt Green is walking not just every street in Manhattan, but in each of New York City’s five boroughs. When all is said and done, Matt estimates that he will walk 8,000 miles. That’s almost three times the distance from New York to LA. 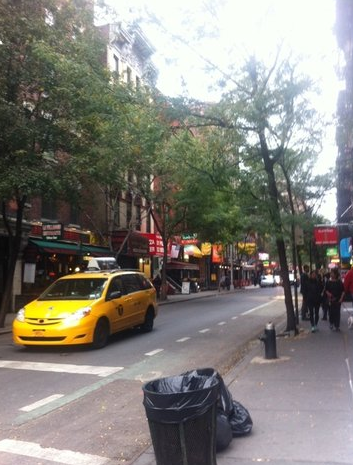 I’m doing things a little bit differently. Mostly, I’m taking this slow. Real, real slow. I’ll be walking just one street a week. Manhattan has 700 streets. If I finish this, it’ll take me thirteen-and-a-half years. I just turned 28. I’d finish at age 41. Why not just huff it, tallying up block after block so I can complete this unreasonable task in a semi-reasonable time frame? Well, the slowness is kind of the point. By tackling just one a week, I’ll be able to write a column about each and every street. Taken together, I hope they’ll add up to something like a psychogeography of a city. Depending on the week and the street, I’ll draw on history, politics, memory, aesthetics, and my own personal experience to try to decode a fragment of the Manhattan palimpsest. 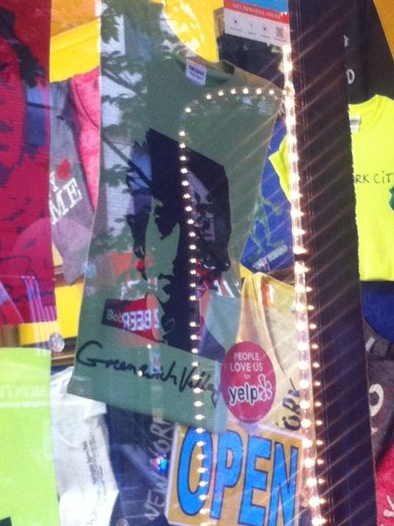 MacDougal Street insists on its history. It wants you to remember the thing it was, and it hopes that the mind-altering fuzz of nostalgia might leave you ready to toss it a few bucks. Dave Van Ronk was the Mayor of MacDougal Street, but Bob Dylan is its icon. He peers out from the windows of souvenir stands, his face a stark, black cut-out like Che Guevara’s. Cafe Wha? is still proud to tell you, fifty years on, that this—this—is where Bobby had his first New York gig. Nobody much remembers Dave Van Ronk or his talk-sing honk anymore, though maybe they will when that new Coen Brothers movie comes out in December. Dylan has a big head start, though, and there might not be room left at the top. You know that MacDougal Street was named after Alexander McDougall? He was kind of a big deal in his day. Revolutionary War hero. Representative for New York at the Continental Congress. First President of the Bank of NY. Now we don’t even spell his name right on the street signs.

A lot of the buildings look pretty much the same as they did in Van Ronk’s day, or Dylan’s day, whoever’s day we want to call it. Some of them have to. They’ve been landmarked, meaning that the Landmarks Preservation Commission has decided they have “special historical, cultural, or aesthetic value,” and that the LPC gets to dictate what alterations the building’s owners are allowed to make. Most of MacDougal isn’t included in the Greenwich Village Historic District, where everything is a landmark, but numbers 127-131 earned the designation on their own. They’re plain looking, but they’re old—from the 1820s—and apparently prime examples of the Federal style. That’s not what draws your attention, though. What draws your attention is the sign hanging in the window of 131. What the hell is “Integrated Aesthetic Dentistry,” and why does it get to live in a landmarked house? 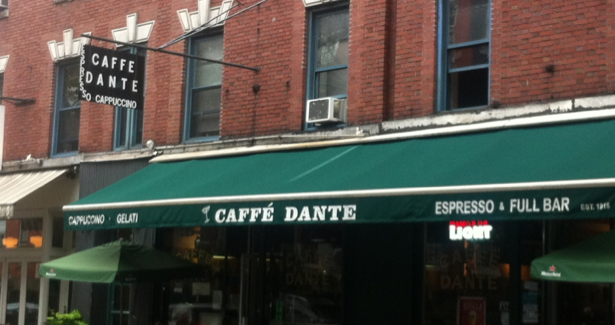 Caffé Dante sits on MacDougal between Houston and Bleecker, just north of the ball fields that I guess are meant for kickball, because who plays baseball on asphalt? There’s nothing particularly special about Caffé Dante. It serves its espresso and Italian desserts, but unlike the college bars, tattoo parlors, and head shops that dot the street, it seems relaxed in its own skin, no neon or flash or Bob Dylan. I’ve been there three times that I can remember. Back in 2011, I met a girl there on something that I hoped counted as a date, but I’m pretty sure it didn’t. The second time was that fall—November 17th—when Charles, Shreya, and I stopped by for a pick-me-up between a morning of clogging the streets of the Financial District and an afternoon students’ rally at Union Square. It was the two-month anniversary of Occupy Wall Street and two days after Bloomberg sent the NYPD to clear out Zuccotti Park under the cover of night. The camp was gone, but we didn’t yet feel any real sting of defeat. The city was crisp and cool and swarming with dissent. We woke up to collisions with riot police and saw the sun set beside 30,000 protesters in Foley Square. At a protest action that morning, one of our friends mentioned her hands were cold and an eavesdropping stranger gave her a pair of gloves. A gift, the giver had said. Shreya had to wipe away tears. When I talk about “The Best Day Ever,” the people I was with know which day I’m talking about. 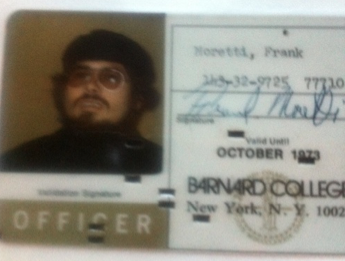 The last time I went to Caffé Dante was summer 2012. I was with Frank Moretti, a professor at Columbia, a mentor, and a friend. He picked me up near campus in Morningside Heights, and his car stank from the leftover fish his daughter had forgotten to remove from the back seat the previous night. We were just getting coffee, but Frank insisted on driving all the way down to the Village. He used to teach at NYU, and before that, he’d been a ‘70s radical in a black beret, kicking around the neighborhood, hanging out at Cafe Wha?, haunting the bookstores. I was fine with my plain black cup, but Frank plied me with cookies and we talked about the class I would help him teach that fall, History of Communications. He wanted to start with Homer. I wanted to finish with David Foster Wallace. (That’s what we’d go on to do.) Frank also told me he wanted us to write a book together, something about rescuing the Western canon from a cultural rightwing that touts its value without understanding its implications and an academic leftwing that is reflexively skittish around anything as imperial as a canon of Great Books. Euripides was the radical of his time, he told me. He died in exile, for Chrissakes! A year later Frank himself would die, but not in exile. The last months of a years-long battle with illness were spent surrounded by family and friends and music in his Riverdale home. We never got to write that book, though.

There is a perfect, 2013 sort of symmetry to MacDougal Street. Up by W. 8th St., a herd of Dodger blue Citi Bikes sit locked in their docks like a chain gang on wheels. Down by Prince St. on MacDougal’s south end is the same sight. It’s kind of funny, these brand new eyesores flanking a street that insists so strongly on its oldness. The Citi Bikes are there to make us forget, not to help us to remember. In this model of public-private partnership, Citigroup is the good guy. They’re about healthy lifestyles, green transportation, civic responsibility. Plus, there must be a certain pleasure in enjoying a meal without worrying that after dessert, you’ll find your bike stripped of its wheels, breaks, and handlebars. It’s so easy to enjoy these Good Things, and to forget that after receiving more than $45 billion in public money to rescue it from bankruptcy, Citigroup turned around and gave 738 of its employees bonuses of $1 million or more. Or that in 2008, Citigroup had to pay $18 million in refunds and fines for straight-up stealing from its customers, using computerized sweeps to pull the positive balances on people’s credit cards into the bank’s general fund. Or that when you ride a Citi Bike around town, you’re paying for the privilege of serving as a two-wheeled billboard for a corporation that helped to crash the American economy a few years ago and thereby ensure that you can’t afford a nice bike of your own. 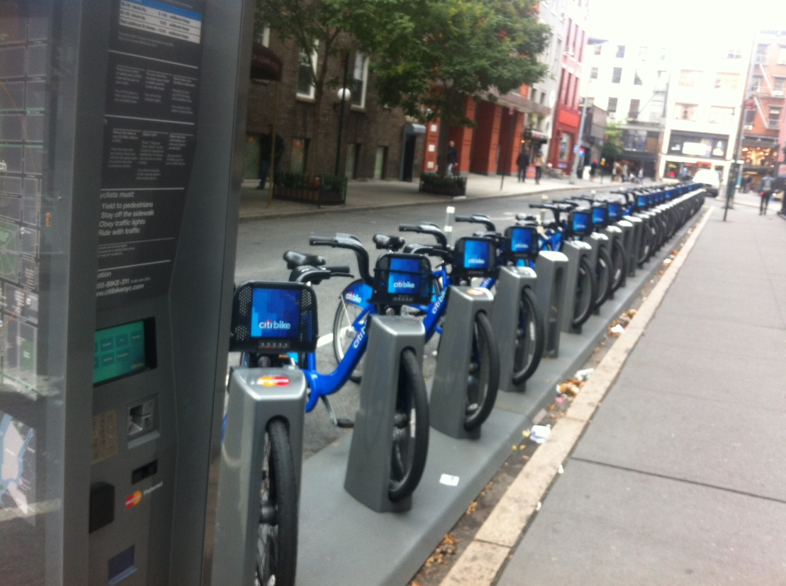 The Citi Bikes might just reveal the new reality behind the beatnik bohemian mask that MacDougal Street wears so proudly. It’s capital using the cover of  hipness and progressive values to colonize what was once enemy territory. When Jack Kerouac wrote his “MacDougal Street Blues,” the view from his window was “the goofy foolish human parade.” These days, he’d mostly see roving bands of NYU undergrads. It’s easy then to laugh and say that maybe things don’t change that much. But then Craigslist tells me a one-bedroom on MacDougal and W. 8th St. will run you $3,295 a month. Maybe it’s some kind of success for a poet to paint a neighborhood with an aura so strong that it prices out all other poets from now till the end of capitalism, and maybe Citi Bikes will somehow sow the seeds of their own destruction. All I know is that thirteen-and-a-half years from now, when (optimistically) this Street Writer project is completed and I can loop back around for a second go of it, MacDougal will still be trying to remind you of the era with Bob Dylan, not the era with the Citi Bikes.