Topography of a Novel: Among the Ten Thousand Things

The secret to a stunning debut novel? Glue-sticking till the break of dawn.

Every book has its own texture, materiality, and topography. This is not only metaphorical; the process of creating a novel produces all sorts of flotsam–notes, sketches, research, drafts–and sifting through this detritus can provide insight both into the architecture of a work and into the practice of writing. Blunderbuss is excited to run this series, in which we ask writers to select and assemble the artifacts of a book in a way that they find meaningful and revealing. In this installment, Julia Pierpont shares the bulletin boards and cut-and-paste jobs that helped her write Among the Ten Thousand Things, released in July by Random House.

Among the Ten Thousand Things is the story of artist Jack Sanley; his wife, a retired dancer named Deb; and their two children Simon and Kay. When a cardboard box filled with printed emails threatens to reveal Jack’s secret life, it sets into motion an “expertly crafted story of a family in crisis” (Library Journal). This debut has earned rave reviews, with the New York Times Book Review calling Pierpont “a blazingly talented young author whose prose is so assured and whose observations are so precise and deeply felt that it’s almost an insult to bring up her age.”

This is my terrible Trunk of Drafts, which is very heavy and very impractical to hang onto given the size of my apartment. 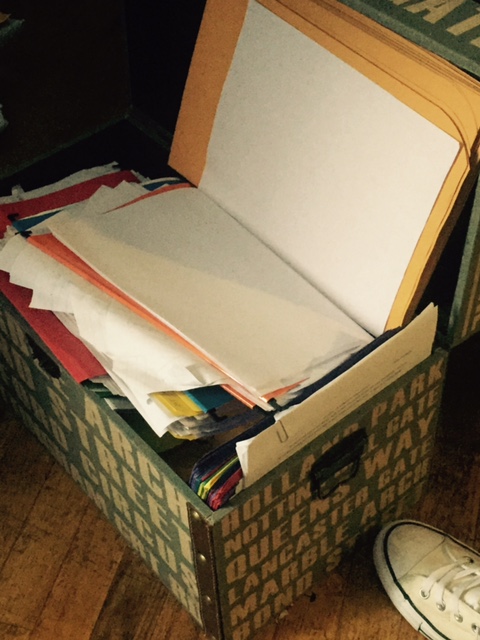 Basically everything I workshopped in graduate school lives in here, every marked up copy of pages I got back from my professors and other students. I workshopped a number of stories in undergrad as well, so it’s not exclusively the novel, though a lot of it is. Line edits aren’t always so common in workshop, so a lot of these pages are probably unmarked. Someday I’ll go through them and decide what to keep, for sentimental or practical use. The Converse in the corner included for scale.

Most of the outlining for the book happened in my head, almost subconsciously. I didn’t actively consider what would happen next so much as found when I got to the next scene I seemed to know where it would go already. (There’s a great Doctorow quote about this: “Writing is like driving at night in the fog. You can only see as far as your headlights, but you can make the whole trip that way.”) 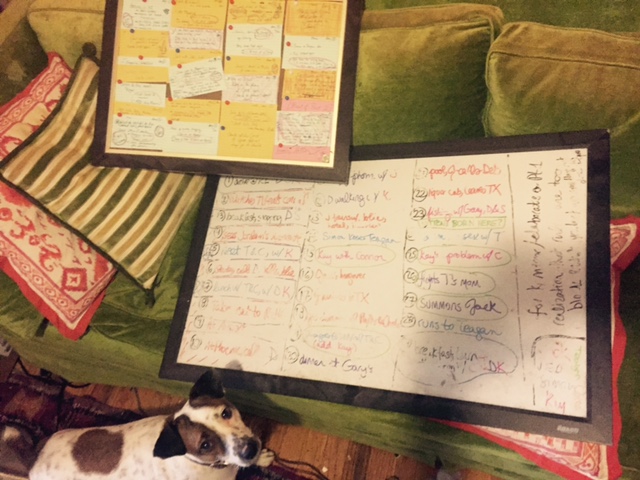 Perhaps counterintuitively, then, these two boards were only drawn up after I’d finished a draft and had problems to fix. The bulletin board was especially useful for reordering scenes. The novel opens with the discovery of a husband and father’s affair and traces the aftermath for the family’s four members (Jack; his wife, Deb; and their kids, Simon and Kay). Because the narrative alternates perspective so frequently, having the flash cards color-coded made it easier to visualize the book as a whole. These are gathering dust under my sofa now; when I’m ready to problem-solve the next book I hope to wipe them clean and use them again. Jack Russell Terrier in the corner also included for scale.

The page below is the result of an all-nighter I pulled sometime in the spring of 2012, when I was working on part two of the book, which breaks from the more traditional narrative. 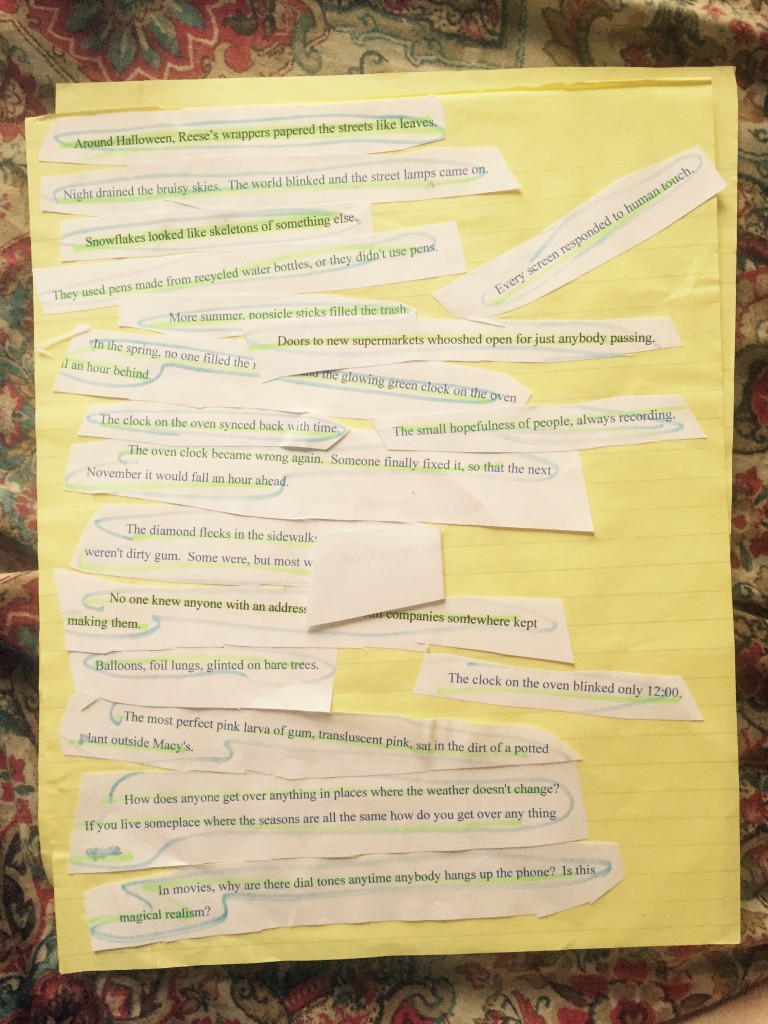 I had amassed all these lines about time passing and wound up cutting them into strips and rearranging them to find the best order. When I was done and the sun was coming up and I could hear the garbage truck making its morning rounds, it seemed like a good idea to glue-stick them onto a legal pad and call it art.

In part three of the novel, several members of the family travel to Jamestown, Rhode Island. I chose Jamestown after reading about it on Wikipedia and falling in love with the names of its surrounding islands (Prudence, Patience, Despair). I made two trips there just to wander around and get a feel for the place. It was in Jamestown that I realized that Jack and Deb weren’t going to stay together. I’d been rooting for them to find a way–or for myself to find a way–of making it work, only it wasn’t, and I remember standing on the docks around sunset and becoming very overcome with sadness over their fate. Here is a picture of the Chinese restaurant where Deb, Simon, and Kay eat their first night: 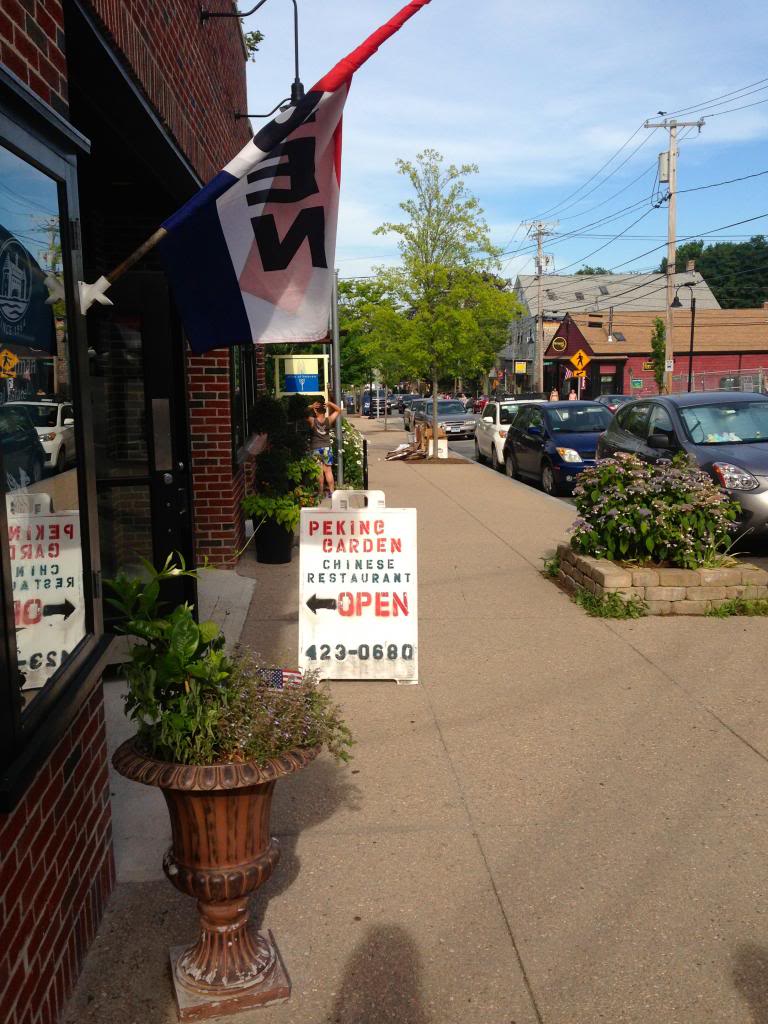 I got my novel’s title and its epigraph from Galway Kinnell’s poem “Little Sleep’s-Head Sprouting Hair in the Moonlight.” At some point I realized that Kinnell later edited the wording at the end of the poem in a way that surprised me. I decided to use the original version for the epigraph, but I find the difference very interesting. Here they are side by side (emphasis, of course, mine):

Julia Pierpont's debut novel, Among the Ten Thousand Things, was published this July by Random House. She graduated from the MFA program at NYU as a Rona Jaffe Graduate Fellow. She works at The New Yorker and lives in Brooklyn with her dog.