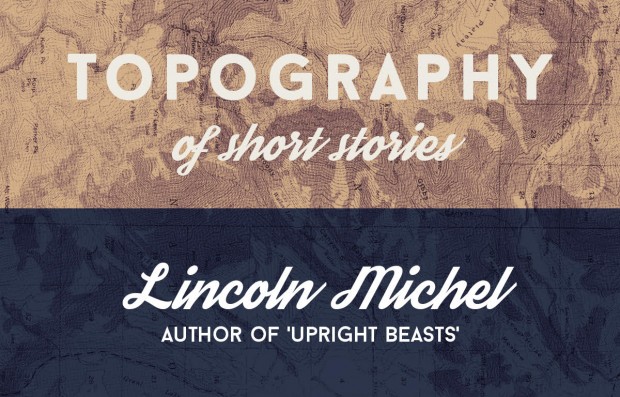 “Stories thrive, I think, on chaos.”

Every book has its own texture, materiality, and topography. This is not only metaphorical; the process of creating a short story collection produces all sorts of flotsam–notes, sketches, research, drafts–and sifting through this detritus can provide insight both into the architecture of a work and into the practice of writing. Blunderbuss is excited to run this series, in which we ask writers to select and assemble the artifacts of a book in a way that they find meaningful and revealing. In this installment, Lincoln Michel shares the time theft techniques that allowed him to steal enough minutes to write Upright Beasts, published last month by Coffee House Press.

Upright Beasts takes us to a world “similar to our own, yet twisted just enough to feel strange” (Publishers Weekly). Children go to school long after all the teachers have disappeared, a man manages an apartment complex of attempted suicides, and a couple navigates their relationship in the midst of a zombie attack. From this often surreal material, Michel spins tales that are “sometimes hysterically funny and sometimes quietly disturbing” (Booklist), and that ultimately coalesce into a collection that establishes him as “one of contemporary literary culture’s greatest natural resources” (Justin Taylor, Vice).

I would like to begin by telling you about my rigid yet always productive writing routine that I follow each day without fail while seated at my beautiful oak desk—overlooking, no doubt, a sea of lush trees covered in flowering vines—and surrounded by detailed story notes, poignant quotes from my favorite thinkers, and a cup of still steaming coffee. However, I’ve been told that this is a non-fiction essay. The coffee is cold, the trees are shriveling for winter, and I played Candy Crush on my phone for an hour before getting out of bed.

When I was asked to write this essay, my first thought was that there was nothing to write because my “routine” and “process” are completely chaotic and scattered. But perhaps that chaos is interesting. My book, Upright Beasts, was written on stalled subway cars, noisy cafes, and park benches. My physical drafts have either been shredded in some recycling plant or else wrinkled and stained in an obscure corner of my bedroom. My computer docs are located alternatively in my documents folder, my downloads folder, and my desktop, with minimal organization.  Sometimes I write by hand in a notebook and revise on the computer. Other times I write a draft on my laptop, then print out and revise by hand. 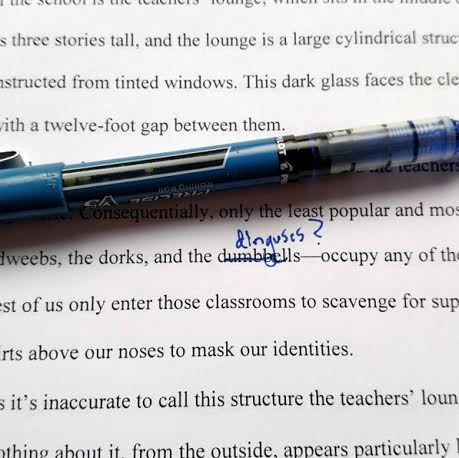 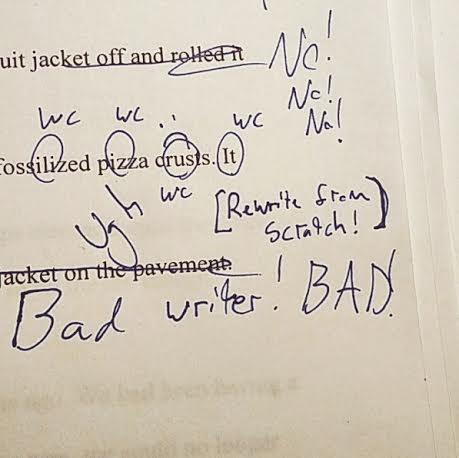 Other times revision is hard.

Perhaps another way to put it is that as a writer who isn’t rich enough to not have a job or antisocial enough to not want friends, you have to be a master thief. You have to steal every ounce of time you can. Scribble notes on receipts; revise when the boss turns his back. Grab every speck of time you can until you have enough for a book to bloom in. That might take a year or a decade, but the little stolen moments will eventually add up.

My process has always been dependent on the story at hand. Some stories sit in my brain for a while, then come out mostly fully formed. Others start as just a single sentence and may undergo many drafts and radical changes. The anti-process process has its benefits though. It adds a bit of chaos and a bit of life to the work. Revision is important, but so is making sure your work is alive. Too much polish dulls everything to same shine.

(At one point, I even worked a typo into a cosmic horror story about mutating hippies:

“We’ll sneak down that slope and make our way back to the road,” Iris said. “Then we’ll come back with police and guns and fucking rapid dogs.”

“Do you mean rabid dogs?”

It helps that my book, Upright Beasts, is a story collection. Stories thrive, I think, on chaos. Stories need to grow in different ways and into different shapes. I like collections that are eclectic, a little ecosystem of different critters and fauna that interact with each other to form a whole. (Critics tend to like monochromatic collections, as they are much easier to talk about if more boring to read.) Novels are different beasts, requiring a skeletal structure that will hold up the characters, plot, and voice for several hundred pages.

Despite my erratic writing process, I was very diligent about submitting my work. Submitting has to be thought of as a job for young writers. I made a list of about thirty magazines I respected and would have been thrilled to be published in. Then I submitted a story to each of those—although only sending one story to five or so journals at a time—and forgot about it. (Fretting over rejection or response time never helps.) When I got the inevitable rejection, I waited a couple weeks and sent a new story. Eventually almost all my stories found homes. 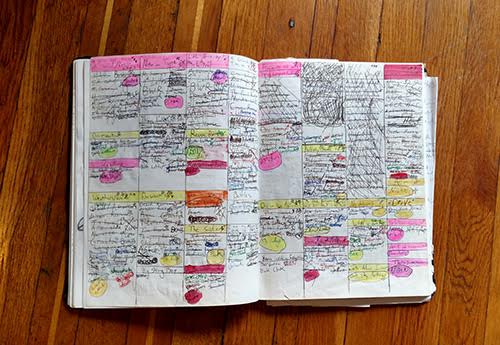 A spread from my submission log. Yes, my handwriting is that bad.

Here I should acknowledge several essential partners-in-crime. The Millay Colony, the Virginia Center for the Creative Arts, and Lower Manhattan Cultural Council all helped me transform my writing time from weekends at crowded cafes to weeks or months with little else to do but write. During those times of excess time, I was able to keep a stricter schedule. Huge chunks of my book were written with these as my offices views: 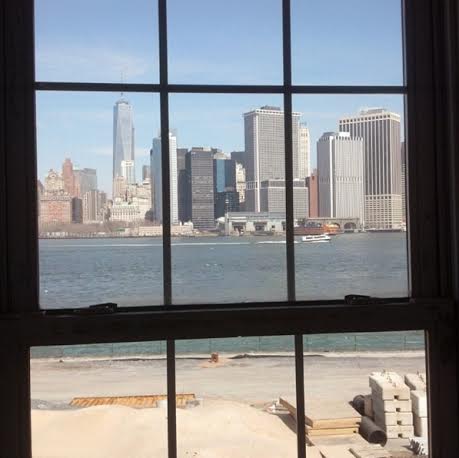 Manhattan as seen from Governor’s Island. 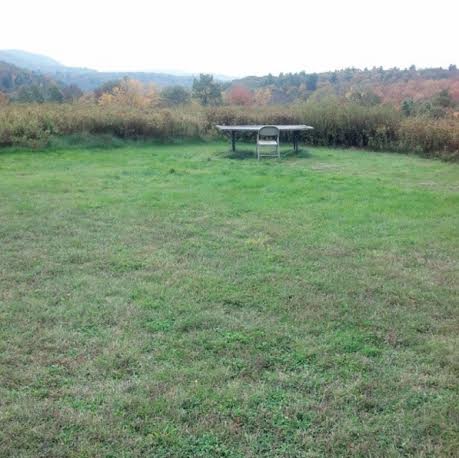 A table at the Millay Colony.

As my first collection, the stories were culled from all the stories I’ve written between 2006 and 2014. Despite the variety, the collection wasn’t slapped together. I spent a long amount of time figuring out the order and what to add or cut. Glancing at my old blog, I think I published a little over 50 stories in that time (I write a lot of flash fiction), and only 18 of those made the cut. (The final collection has 26 stories, so there were another 8 at-the-time-unpublished stories included in the final draft.)

Upright Beasts contains a fairly diverse set of stories that range from realism to surrealism, love stories to body horror, flash fiction to mini-novellas. I read and take inspiration from many different styles, genres, and forms, and it seemed right to have that reflected in the book. Figuring out which stories to include from the 60+ I had finished was both harder and easier than it might seem. Easier, because I was able to eliminate about half the stories off the bat for either being too different or not up to my current standards. But figuring out what to do with the other half was a long slog. Because of the variety, I tried a lot of different organizations and each organizational structure required different stories. For example, when I ordered the collection like a mixtape, a couple similar stories spaced out in the text added resonance. When I finally decided on organizing the book into four different mini-books, a lot of those similar stories felt redundant when side by side and had to be cut.

The final section-based organization was actually my original plan for the collection way back before I had an agent. My long organizational odyssey was perhaps just a way to bring me back to where I’d started. So it goes with writing and revision much of the time.

Anyway, that’s how you create a story collection. You steal time whenever you can, steal story ideas wherever you can, steal inspiration, steal office supplies to mail out submissions, steal and rob and gather all these parts together on the slab and stitch them together until your own little Frankenstein monster is ready to be born.

Lincoln Michel is the editor-in-chief of electricliterature.com and a founding editor of Gigantic. His work has appeared in Granta, Oxford American, Tin House, Pushcart Prize anthology, and elsewhere. He is the co-editor of Gigantic Worlds, an anthology of science flash fiction, and the author of Upright Beasts, a collection of short stories on Coffee House Press. He was born in Virginia and lives in Brooklyn. You can find him online at lincolnmichel.com and @thelincoln.