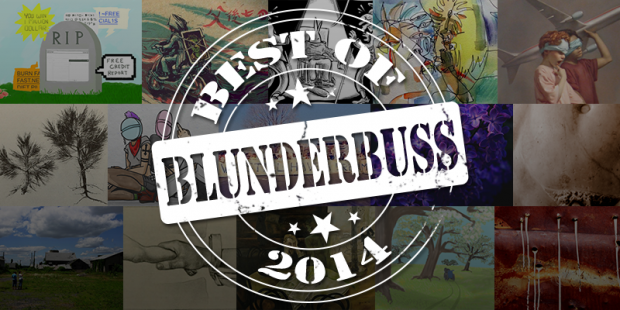 An incomplete accounting of some of the best work we’ve run this year.

End of the year lists can be a drag. Not only does fantastic work inevitably get excluded, but the whole exercise of list-making implies a rank oriented, status obsessed, uber-competitive approach to art that is, frankly, kind of gross. We know all of this.

Even realizing that any list would be incomplete, that work we adore and are incredibly proud to have published would necessarily (and arbitrarily) be left out, and that we’d be contributing in our own small way to the listicle-ification of culture, we couldn’t resist putting together our own “Best of Blunderbuss 2014.” The work below is—in our own humble estimation—top-notch, but the list is not a definitive accounting of what’s worth reading and seeing. It’s more a chance for us to highlight outstanding pieces that you might have missed and a way to showcase the quality and breadth of work Blunderbuss has run over the course of the year. If you like what you see here, we’ve got a whole damn web magazine of other work that you’re likely to enjoy. If you don’t like what you see, you’re an unfeeling, unthinking monster and we honestly don’t care if you never darken our (e-)doorstep again.

Nahm’s staid, quiet writing guides us through a the history of property scarred by a bloody murder of two young girls.

“Emails From My Dead Mother”
by Jonathan Papernick

It starts with the usual spam. But when Rooster starts receiving emails from his dead mother’s address that contain details from his childhood, he finds himself hoping it may really be her. Papernick crafts a story that is both funny and heart-wrenching, as Rooster seeks to repair the complicated relationship with his mother from beyond the grave.

The story’s sharp, unflinching prose underscores the high cost of war at a ceremony for veterans wounded in Iraq. Slater displays his technical prowess within a narrator that is at once even-handed and emotionally raw, as the reader readily follows him into the depths of the “War on Terror”… and back.

Weaver navigates a scene of hard drugs and queer sex with a narrator that is both earnest and exacting in a story about longing for human connection.

Atiya’s poem brims with materiality: a t-shirt with violets on it, bamboo houseplants, a carton of strawberries. In this world, the heart wants what it wants, which is everything, which is cast-iron with “multifunction for cook and kill.”

These three poems speak to the complexities of communication, causation, and memory. In spare, precise lines, Geter’s work reminds us that even when we say exactly what we mean, there is still remainder and reckoning.

The sight of a poem in the shape of a gun is enough to startle, but it’s what’s inside these pieces that stays with you. Impressively formal, strikingly modern, completely new, Ray’s poems speak of themselves and for themselves.

Stevenson’s four poems grapple with remnants, with what we’re left with when we’re left with ghosts. The openness of these poems bears the weight of their sadness, carries the reader past a threshold to where embers still burn, a search goes on.

Lyrical, melancholy, girded by an uncommon emotional honesty—this essay gracefully captures the excitement and tenuousness of a romance in transition.

In this elegant translation of Essay Liu’s memoir, a baffled Taipei urbanite struggles through the motions of rural Taiwanese grief at her father’s funeral.

With prose as raw and impassioned as the punk rock scene it portrays, “Blue Rats” narrates the tumult and the tenacity of two women’s friendship in the face of addiction, assault, and disease.

Drawing on her experiences in the d/Deaf community and as a teacher of children with autism, Sara Nović artfully deconstructs our cultural obsession with “normalcy” and demonstrates that ableism is a problem every bit as insidious as racism and homophobia.

In fragments that are both crisp and personal, Mushett tackles global questions of sight and suffering—what does it mean to be alive in an age where “humans saw off the heads of other humans” and what do we have to learn, or lose, by looking?

With his anarchic “Bunnyman” comics, Ellis Rosen stretches narrative conventions to their limits, skewers targets both sacred (the human condition) and profane (sponsored content), and creates a chaotic, exuberant neo-noir world that is a joy to inhabit.

Through a series of paintings documenting her efforts to translate a book of Spanish poetry, Heather Simon takes us on a lush and fascinating journey through her creative process, from words to watercolors and back again.