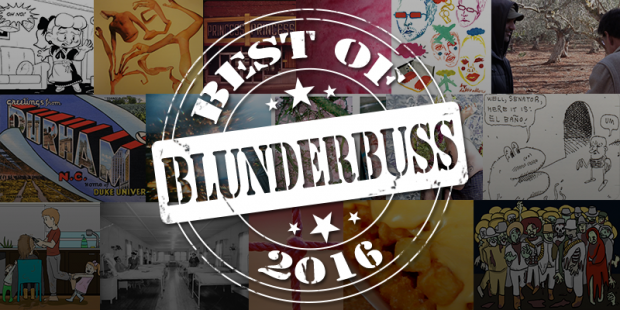 The work that helped us get through this nightmare of a year.

2016 was awful. 2017 promises to be worse. Art alone cannot save us from the racism, sexism, authoritarianism, and other sinister forces that threaten to intensify under the Trump administration. In this time of crisis, activism must become part of the rhythm of our daily lives. Signaling our political affiliations on Facebook is no longer enough. We must organize, band together, and resist.

But art will help us endure. It will give us strength. It will remind us that even as the world grows more sinister, we’re not alone and we’re not powerless. It will find strength in our differences and build solidarity across factions. It will remind us of the joy, the compassion, the humor, and the beauty that we’re fighting for, and it will rage against the evils we stand against.

This year-end list is necessarily incomplete. Great work is inevitably left out. But we want to highlight some of the work that helped us get through this nightmare of a year. Hope you enjoy.

“I am not Edward Snowden”
by Nellie Hermann

We are all not Edward Snowden, except for Edward Snowden. Even still, Hermann manages to bring his unknowable inner life depth and vivacity in this story, also featured in our print edition.

“After Action”
by Drew Pham

As the title suggests, we meet our protagonist after the action of his first kill has subsided, but the real drama is just beginning. Pham renders an ugly war beautiful and true in an exploration of what it means to kill or be killed in the “War on Terror.”

The protagonist’s zombie father has been experiencing a lot of racism lately, in part, he suspects, due to a popular TV show, which never features a zombie-centric storyline. Still our narrator longs to belong one way or another, and one day might even be brave enough to be bitten.

“We All Fall Apart”
by Corey Skatula

What happens when a lovelorn protagonist’s heartbreak manifests in the physical breakdown of his body? Follow the disintegration in this Kafkaesque breakup story.

“Junk: An Excerpt”
by Tommy Pico

Funny good poems are rare. “For a / minute we were in the / donut I mean moment.” And this one tells an important story, with insight.

Simple at first glance, clean, resonating like a struck gong. The language and the narrative are superficially straightforward, but so much more is happening, is gestured toward–and that ending!

Mass culture vs interiority vs observing strangers. A perfect place for poetry to go–especially when it’s funny.

Pleasing tension. Poems that make pictures in your mind. Even more than–you know. Other poems.

“She”
by Lynn Steger Strong

A beautiful meditation on what it means to inhabit a female body, and on the interlocking identities of womanhood, motherhood, and writerhood.

“I SAW SUCH HORRIBLE THINGS”
by Max Ritvo

In prose that’s by turns heartbreaking and hilarious, the author describes how the act of writing helped him to process his experiences as a cancer patient. Max passed away this summer, and this essay is a reminder of the vibrant, brilliant individual we lost.

“A Deportation”
by Amin Husain with Susu

Technically, this piece (which ran in our print issue) was originally published online at the tail-end of 2015, but the story it tells is more timely than ever. In it, the authors lay out the costs of activism, and what it’s like when your political convictions mean that you can’t go home again.

“Accounting for Home”
by Matt Hartman

While at once serving as a reflection on growing up as a person and as an activist, this piece also offers a novel theory of “home”–what if it’s not a place, but a method?

These photographs vibrate with curiosity over the textures of both the natural and the human world, finding surprising visual echoes that push viewers to pay renewed attention to the world around them.

This multimedia art piece transports us 1,000 years into the future to a world where all current social, political, environmental, and technological structures have been radically transformed.

“The Purloined Passion”
by Benjamin Frisch

Using sharp wit and irony as his weapon, Frisch drags the Disney-drenched concept of a perfect union into the real world with crisp art and clear story telling. It also serves a warning to never marry a magpie.

“Thirst is the Worst”
by Drew Lerman

The surreal storytelling and linework of Drew Lerman is at its best with “Thirst is the Worst.” The brilliant expressions and body language of the characters navigates you through a drought-ridden dreamscape that’s equally funny and haunting.
______________
Illustration by Yvonne Martinez.