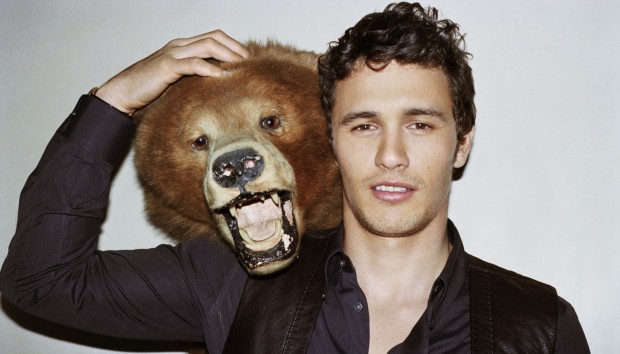 You, Too, Dislike It: Line-Babble Expressed

This week I’ve chosen “Film Sonnet 3” by James Franco—yes, that James Franco—originally published in The American Poetry Review. (For the record, that is a well-regarded magazine.)

He walks mindlessly, maniacally
Across the desert, like a Sam Shepard man,
A man who has been down to Mexico to die
Of a broken heart but didn’t die,
So he comes back to Texas, and then to Los Angeles,
Because all the cowboys retired to the movies.
Now they don’t even make Westerns anymore.
Paris, Texas, the name of the place
Where he bought some land, like a slice of Paradise,
But only in his mind. The real place
Is just a deserted plain in the middle of nowhere,
And his wife is working in a peepshow palace,
And you never think, but you should,
He was too old and ugly for her in the first place.

Among his many other hats, James Franco is a poet. Since he is James Franco, the Chicago Tribune writes it up when he reads his poems in public. Are those poems any good? “Film Sonnet 3” is the first Franco I’ve read.

I was ready to hate it. Franco repeats words more than is generally advised. His subject matter appears trite on first read. Plus, he’s a famous actor.

But I’ve come around to the poem. For one thing, repetition is fair game, a tool like any other. Then I began imagining the lines as voiceover narration in a made-up Western. That is clearly his source material, after all: the West as imagined by Hollywood. In this context, the simplicity of his language starts to look less “amateurish” and more “self-aware vernacular play.” I think both readings are fair.

I see the end of the poem as another riff on the way we live with movies: “she’d never go for him in real life” is a common refrain.

For better or worse, my critical instinct is to look for the good. (This makes rejecting poems for Blunderbuss SUPER HARD.) Part of my generosity toward Franco comes from an interview he gave elsewhere in the Tribune; the man made the right noises to support the purposeful use of plain language:

“The way I view it, accessibility is a way to have people grasp what is going on, a torque that acts as a through-line to ideas. A lot of contemporary poetry is consciously obtuse and does not make an effort to pull you in. Fine, those poets are doing different things. But I was taught to grab a reader, not push them away.”

At first I was all, “torque that acts as a through-line,” PFFFFFFFFFFFFFF. But the fact is, if a poet I already admired gave that quote, I would be posting it to Tumblr bedecked by celebratory animal gifs. Subjectivity is terrifying!

A successful actor writing acceptable poems is a tough pill to swallow, but I’ll live. After all, he was TRAINED—and they don’t give MFAs to just anyone.

In the end, though, Franco’s poetry will live on mostly as a punching bag for less-famous poets everywhere. After all, we complained about Jewel’s poetry for more than a decade.

Quick note: the title of the post is a pun on this and if you’re looking for an apology, you came to the wrong place.