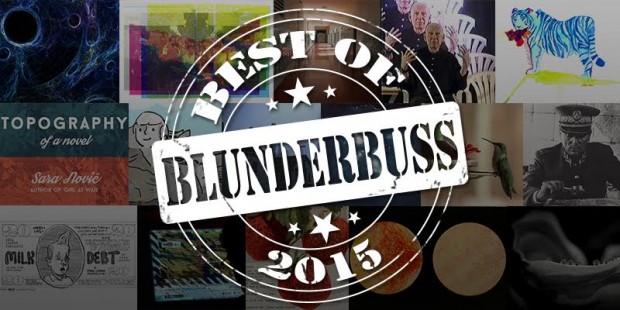 Our annual, enthusiastic-yet-necessarily-incomplete accounting of some of the best work we’ve run this year.

End of the year lists can be a drag. Not only does fantastic work inevitably get excluded, but the whole exercise of list-making implies a rank oriented, status obsessed, uber-competitive approach to art that is, frankly, kind of gross. We know all of this.

Even realizing that any list would be incomplete, that work we adore and are incredibly proud to have published would necessarily (and arbitrarily) be left out, and that we’d be contributing in our own small way to the listicle-ification of culture, we couldn’t resist putting together our own “Best of Blunderbuss 2015.” The work below is—in our own humble estimation—top-notch, but the list is not a definitive accounting of what’s worth reading and seeing. It’s more a chance for us to highlight outstanding pieces that you might have missed and a way to showcase the quality and breadth of work Blunderbuss has run over the course of the year. If you like what you see here, we’ve got a whole web magazine of other work that you’re likely to enjoy.

In quiet, intelligent prose, Ford examines a family and nation on edge–as Marshal Tito’s health fails, the narrator wonders “if a symbol of a thing dies, does the thing die with it?”

Ah-reum Han paints a vivid picture of a favorite spot in the mangroves, a relationship between father and son, and the daily life in The Gambia, all in less than 350 words.

Gottfried presents a portrait of old age at once tender and unflinching as her narrator finds himself injured and looking back on family, love, and hummingbirds.

“The Blue Tiger”
by Rihanna Reinmuth

The story traces an argument built of passive aggressiveness and technology-addled miscommunication with such realism, readers will no doubt find themselves indicted by both the self-awareness of its characters and the foolishness that brings this relationship to its knees.

A monologue, a performance, a stream of consciousness so artfully constructed, riotously funny, and deeply felt that it’s impossible to finish this poem without immediately beginning again.

Soto interrogates the body and spirit using language that feels material—”Say that I am the cassette tape / Whose hair unwound, underwater”— and utterly vital—vital as vitalis, as in vita, as in life.

“Everyone wanna put hands on a piece of your life,” the poem begins. Priest depicts lives undone by regret and leaves the reader breathlessly clinging to whatever is theirs to grasp.

Chelko’s “Be” poems are vivid, veering, and seductive. Their sharp turns create instability, but there is an essential and sharply rendered core of awe that feels something like love.

When Butler looks at Marshall “Do” Applewhite, the leader of the infamous Heaven’s Gate, he doesn’t see a monster or a punchline. He sees the traces of his own childhood spent in the Christian Science church.

A former teacher provides a heartbreaking ground-level view of how the American education system fails its students of color.

In a charming, conversational style that harkens back to Joseph Mitchell, Ignoto artfully and poignantly juxtaposes the intoxicated post-adolescent pilfering of a South Dakota tourist trap with the theft of the Lakota land it rests on.

Chapman’s candid memoir of the personal and physical challenges of gender transition provides an intimate, moving look into the process of becoming the man you were meant to be.

The most exciting writers of the past year–Alexandra Kleeman, Julia Pierpont, Tracy O’Neill, Lincoln Michel, Jay Deshpande, and our own fiction editor Sara Nović–share the notebooks, scribbles, photos, sketches, and other detritus that they accumulated on the way to finishing their latest books. An unorthodox insider’s look into the writing process from those who know it best.

“Definitions Without Words”
by Daniel Schwartz

With humor and keen observation, Schwartz charts the terrain where words have yet to keep up with meaning–“the dark matter of language.”

Julie Henson transforms four decades of news media into a palimpsest of the American unconscious, filtering collective memory and cultural archetypes through cyan, magenta, yellow, and black. In an era when sensational performance has become normalized as “news,” Henson restores its strangeness through layers of icons and images.

What happens when you mix earthy, surrealist humor with a sharp-eyed dissection of capitalist machinations? A glorious comic where fifth-graders trade debt, swap spit, and… well, we won’t spoil it for you.